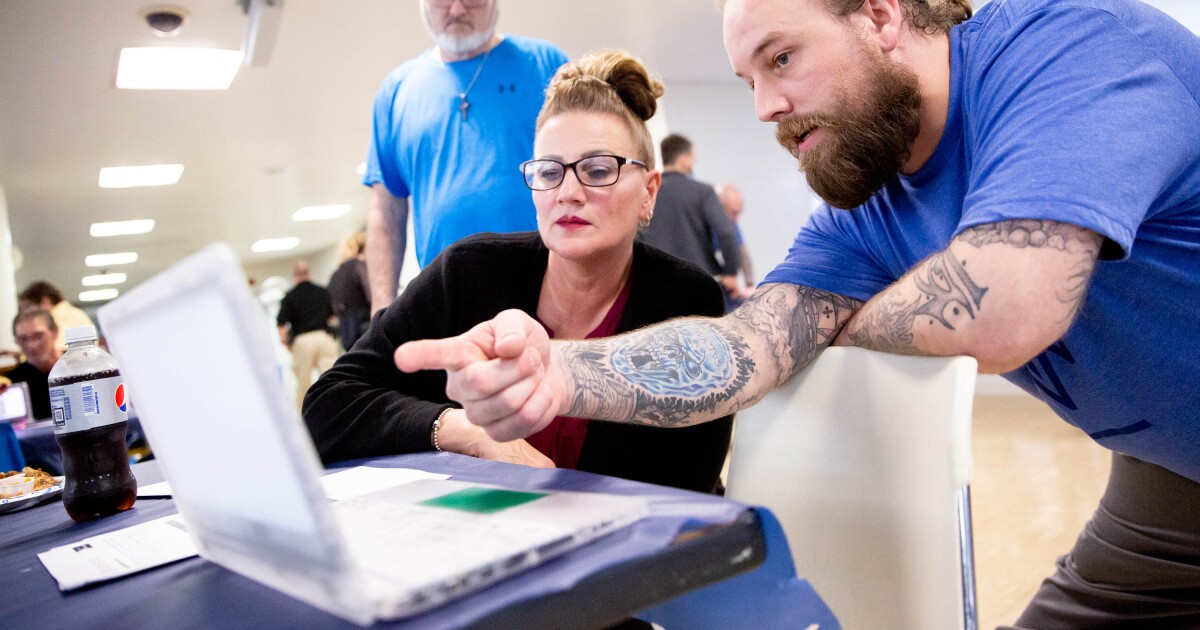 Most nights, Corey Pride is awake long after the rest of the men in his cellblock have fallen asleep, the soft glow of his laptop illuminating the concrete walls.

Pride, 39, has been in prison for nearly half his life — and in that time, he’s tried to learn as much as he can about computers. Until recently, having a laptop inside his cell would have been unthinkable. Just a few years ago, he said, prison officials didn’t even allow inmates to have some computer books, deeming them security risks.

But in the past year, his situation at Missouri Eastern Correctional Center has changed dramatically. After taking an intensive course in web development at the medium-security men’s prison 30 miles west of St. Louis, Pride now spends much of his time coding and designing websites.

“Programming takes me away from any chaos that’s going on,” Pride said. “I can zone in and lose hours at a time, just programming.” Taped to his laptop, a strip of paper reads, “Wake up determined, go to bed satisfied.”

About half of all people who are released from Missouri prisons return within five years, according to the Department of Corrections. But decades of research has shown prison education programs can help break the cycle. St. Louis-based technology nonprofit LaunchCode is betting on this approach, training inmates in computer programming while they’re still incarcerated to give them a shot at landing tech jobs once they’re released and avoid returning to prison.

An analysis from the U.S. Department of Justice of more than 50 research studies found inmates who took an educational course were 43% less likely to return to prison than those who didn’t.

LaunchCode founder and billionaire entrepreneur Jim McKelvey told the graduates there is a “strong bias” in the highly competitive tech industry against people from nontraditional backgrounds — especially those who have been incarcerated.

“The hardest job placement is not age or race or gender, it’s somebody who’s come out of prison,” said McKelvey, co-founder of Square. “But the good news is that programming is tough and the people who have come through the toughest pathways are the toughest coders.”

Thousands of students have taken the free programming course through LaunchCode since 2016, but the nonprofit has only begun offering it in Missouri prisons in the past few years.

Because Missouri inmates are not allowed to use the internet, instructors set up a closed-loop server inside the prisons and gave each student a secure laptop designed specifically for prison education. Even in the highly constrained environment of the prison, the students have shown an “intense aptitude” for coding, said Haley Shoaf, vice president of justice programs at LaunchCode.

“There’s just a huge amount of hunger and excitement from incarcerated students for learning these skills, both just as a personal development and skill-building opportunity and also as they think about moving forward into the world,” Shoaf said.

‘I dream about coding’

Before taking the programming course at the prison, Avis Haymon, 42, had never used a computer.

“I’m looking at commercials and seeing how much everything has advanced since I’ve been incarcerated,” said Haymon, who has been in prison since 2008 and graduated from the LaunchCode program in March. “People are using technology for everything, and I have no technology experience. I don’t want to be left behind in society.”

Trying to learn advanced coding skills was stressful, and at times, he considered quitting. But every small step — learning how to type, how to navigate new programming languages — gave Haymon enough momentum to keep going.

“Now, I think I dream about coding, because if I have a problem, I just can’t get it out of my head,” Haymon said. “It’s almost like playing a video game all day; it gets that interesting to you and draws you in.”

Learning how to code has also given the students the tools to tackle major institutional challenges. Some are designing employment platforms that would allow inmates to apply for internal prison jobs electronically, rather than submitting paper applications.

Others, like Corey Pride, are working to address a problem that he and many other incarcerated parents have faced: how to stay up to date on their children’s schoolwork.

His son, now 18, was born shortly after Pride was sent to prison, and it was a struggle to keep up with his progress in school from behind bars. He recalled a particularly frustrating time when he tried to order “All Quiet on the Western Front,” so he could read along with him.

“It ended up taking me six weeks to get the book,” Pride said. “By the time I got it, the assignment was done.”

Once he learned how to code, he developed a prototype app called “The Bridge” that would provide real-time updates for incarcerated parents on classes and assignments.

With his parole date less than nine months away, Pride said he now feels more confident about trying to move into the tech industry. “I was planning on entering the job market on my own and trying to see if I could do this,” he said. “Now I have a little bit of credibility, so I think I might have a leg to stand on.”

Some formerly incarcerated students are already navigating this transition.

Chris Santillan was released from prison in February, after nearly 28 years behind bars. He completed the LaunchCode pilot program at Potosi Correctional Center and is now working at Unlocked Labs, a tech startup that designs learning management systems for people in prison.

Though computer programming was daunting at first, Santillan, 47, said he quickly became fascinated with it.

“I was the kind of kid that whenever they got a new toy, they always broke open the toy to see how it works,” Santillan said. Coding is the “virtual version of breaking open the toy and seeing how the program works.”

After almost 30 years in prison, the world feels new and unfamiliar to Santillan — from video screens at gas pumps to self-checkout kiosks in grocery stores. The idea of completely rebuilding his life is overwhelming, but he’s trying to think about it like he’s designing a computer program: step by step.

“If I were to take that 10,000-foot view and say, ‘Hey, how do I fit in with the world?’ it would paralyze me,” he said. “But if I can take it down into simple chunks, like developing a morning routine or how do I clean the kitchen, it’s not as scary because I’ve already formed these tiny little milestones to not only make sense of my day, but to give me the confidence to say, ‘I solved all of this and it was a good week. Let’s see what I can do next week.’”