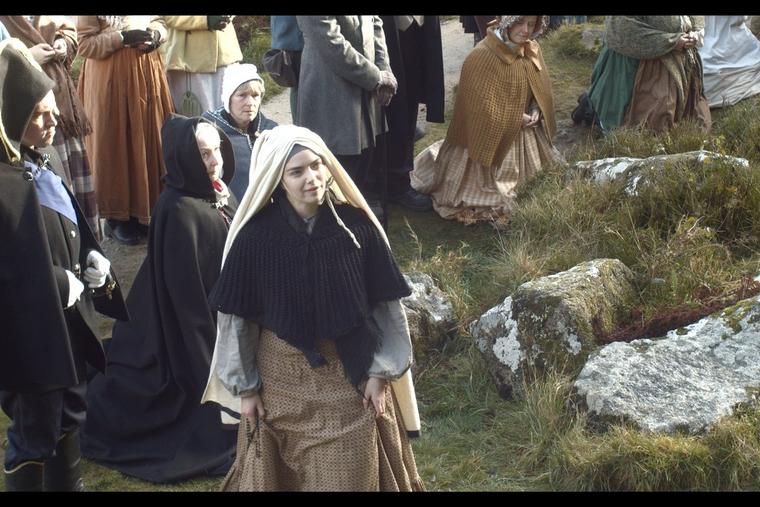 On Dec. 8, the Eternal Word Television Network (EWTN) will screen The Message of Lourdes.

The network’s latest film is based upon the life of St. Bernadette and the 1858 Marian apparitions at Lourdes in France.

Stefano Mazzeo, director of The Message of Lourdes, told the Register that the genesis of the film was in 2017, just after he had completed The Message of Fatima television series, also made for EWTN. It was then he was approached by John Elson, director of program acquisition and co-production at EWTN, with a view to making a 90-minute film based on the events surrounding the apparitions at Lourdes.

After some preliminary visits to the Grotto at Lourdes, the place where the apparitions took place, the following year, Mazzeo began to work on the project. This development phase, he explained, consisted of “research and a lot of reading, making copious notes, finding a concept and costing the project.” These ideas and their costs were submitted to EWTN commissioners in Alabama, who subsequently “green-lit” the project.

Thereafter, having written a screenplay working with his co-producer, Ellen Plumridge, Mazzeo embarked upon the pre-production phase of the film. “The brief from EWTN was that this project be more of a docufilm rather than our usual docudrama,” Mazzeo explained, “with the production to have a cinematic quality.”

Soon, the script was passed to his co-producer, whose job it was to scout out locations for filming. Plumridge told the Register that finding locations proved a “considerable challenge.” Filming locations had to have “no traffic, no airplanes, 360-degrees rural [camera angles] to allow for reverse shots, water, rocks, and, of course, it must be accessible to a film crew. Yes, this was a big challenge!” The greatest challenge of all, however, was finding somewhere approximate to the Grotto at Lourdes.

Plumridge also began work on sourcing the various costumes, which are key to any historical drama. For these, she began by viewing as many contemporary photographs as she could, to assess the appropriate attire for both the peasants and others, especially the local officials. For the peasant costumes, she said, “the important thing was to ensure that they were made of natural materials and looked worn and rustic.” In particular, what she described as “the unusual cloak” of St. Bernadette “had to be exact to the pictures and be made of cream wool with a black trim,” adding, “A good job I can sew!”

By June 2021, Mazzeo was auditioning for actors. “We auditioned around 12 actresses for the part of St. Bernadette,” he said. “But it was obvious from the first moment that Esther Slater was perfect for the part.”

Slater is new to EWTN films and also new to the story of Lourdes. She knew little about the saint whom she was to portray on screen. Speaking to the Register, she said: “I hadn’t been introduced to St. Bernadette before the audition. But I made it my goal to get to know her and understand her story so I could portray her life the best I could.”

She described playing the 19th-century French saint as “a wonderful experience,” going on to say, “With so many angry characters and stress-filled storylines” in so many mainstream scripts, “it was so lovely to tell a story of quiet confidence, where love and faith are at the center.” As an actress, her takeaway from working on this production is, she said: “Trust what God has told you. He is with you and will give you what you need when you need it.”

After approximately 12 months’ preparation for the film shoot, filming began in Bristol, England, in in October 2021. During the months that followed, as Mazzeo described, there were inevitably highs and lows. “There were several low points,” he said, “bad weather on Dartmoor — a national park, where we filmed the Grotto scenes — losing us precious filming time. Esther being taken ill in the middle of the shoot … the worry that it might be COVID, but, thankfully, it was not.”

He recalled many of the high points of the production, too. “The first day of filming with the acting being of a high quality; seeing Esther playing St. Bernadette so well. Seeing the first rushes [footage] and thinking ‘Yes! It’s working!’ Also, the later edits, rough cuts, when the music was added and the color grading is done, as the film starts at last to come together.”

With the filming completed, the post-production phase began. Crucial to any film is the musical score that augments the images on the screen. Adam Tucker composed the film’s sound track. “The main challenge was that the film was held up in the editing process, so I had six days to write the entire score, rather than three or four weeks, which would be more usual,” he told the Register. Still, he remembered how, “thankfully, the ideas flowed, and I’d already had a number of themes in mind for the film so was able to make use of those. Somehow, I managed to get it done in time.”

The film’s score is comprised of almost all original music. Tucker’s task was to create new musical themes to represent the various events and characters. Both composer and director worked closely on ideas of how these themes should sound — on the tempo, even sometimes the pitch and orchestration. “Mazzeo would point me to existing music which he thought would suit, and then I would write new themes with a similar feel,” Tucker explained. “Left to my own devices,” Tucker continued, “only very occasionally would [Mazzeo] listen to a section of score and ask for tweaks. It’s a very satisfying process, and I hope that my music says what it needs to and helps to enrich the film.”

With the film about to air, Mazzeo’s hope is that those watching The Message of Lourdes will be inspired by its story to go on pilgrimage to Lourdes. It was there, in 1858, that Bernadette Soubirous, the 14-year-old daughter of a miller, reported 18 apparitions of “a Lady” at the Grotto of Massabielle. After initial scepticism from the local clergy, the visions were approved eventually after a canonical investigation. In 1933, Bernadette was canonized by Pope Pius XI.

Doug Keck, president and chief operating officer of EWTN, told the Register that this latest film comprises part of a series of films on Marian apparitions made by EWTN in such diverse countries as Ireland (Knock), Portugal (Fatima) and Rwanda (Kibeho). In particular, Keck said these cinematic reconstructions are specifically “designed to dramatize these events [of Our Lady’s apparitions] based on official eyewitness accounts of those who were there.” By so doing, he hopes the audience cinematically gets “to experience each apparition exactly as it occurred.” Furthermore, he feels that films such as these are important, especially at this time. “Because we live in a world that is so materialistic, it is essential for us to remember the supernatural nature not only of the apparitions themselves, but the healings that have taken place over the years there.”

“Finally, God in these [latter] times wishes his Blessed Mother to be more known, loved and honoured than she has ever been” (True Devotion to Mary, by St. Louis de Montfort).

The Message of Lourdes airs at 3:30pm Eastern Dec. 8 on EWTN.

January 24, 2023 Fransiska
We use cookies on our website to give you the most relevant experience by remembering your preferences and repeat visits. By clicking “Accept All”, you consent to the use of ALL the cookies. However, you may visit "Cookie Settings" to provide a controlled consent.
Cookie SettingsAccept All
Manage consent