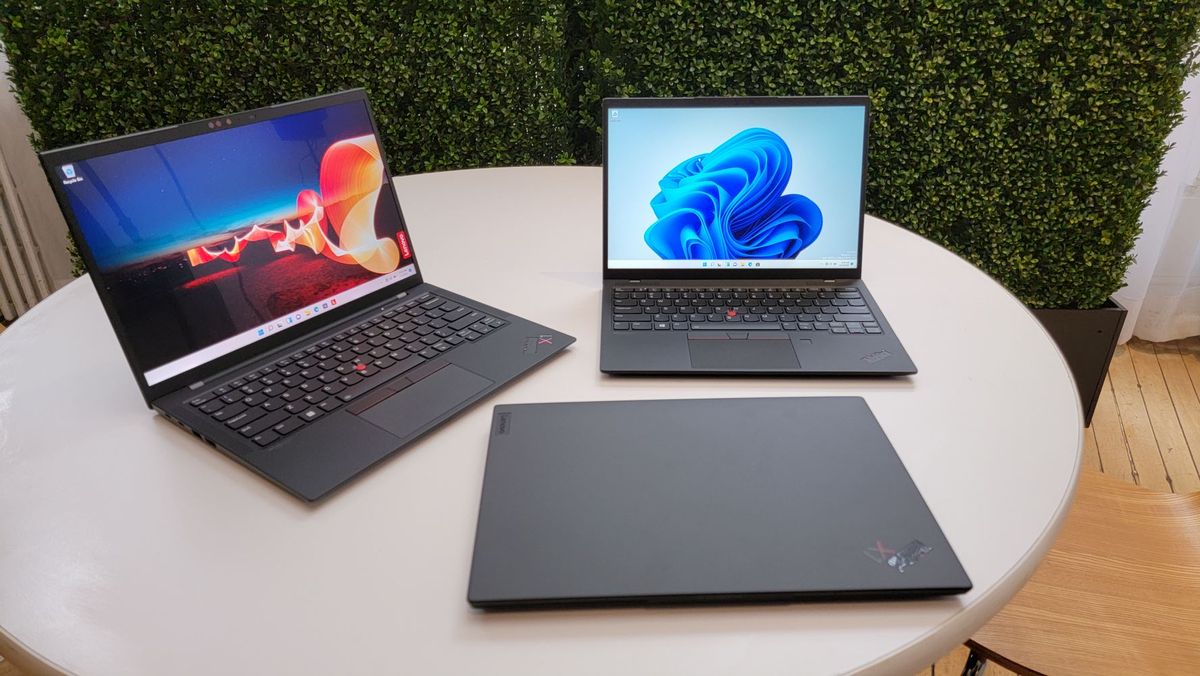 The other members of the X1 family — the X1 Nano and X1 Yoga — are also getting these new features as part of their Gen 2 and Gen 7 models, which are due out at around the same time. We had a chance to see all three laptops at a Lenovo press event and spend some hands-on time with the X1 Carbon (10th gen), which seems poised to retain its predecessor’s place among the best ultrabooks.

The ThinkPad X1 Carbon and its siblings have traditionally used Intel’s 15-watt U series processors. These chips make sense for ultrabooks because they provide solid performance while sipping power and staying cool. However, with the 2022 models, Lenovo offers the option to use Intel’s latest, 28-watt P-series processors, which promise much stronger performance.

However, in order to maintain strong battery life, the company will tune the TDP down to 20 watts on the X1 Carbon and Yoga and 19 watts on the X1 Nano. Even so, you can expect more cores and higher clocks. For example, the Intel 12th Gen P-series Core i7 processors have either 4 or 6 performance cores, while the Core i7 U-series processors have just 2 performance cores.

Lenovo told us that, despite the higher TDPs on the P-series processors, you should expect the same kind of epic battery life we saw on previous X1 laptops. On our battery test, which has continuous web surfing over Wi-Fi, the 9th Gen ThinkPad X1 Carbon endured for 15 hours and 39 minutes.

The Lenovo ThinkPad X1 Carbon has long been the productivity Ultrabook of choice for business users and anyone who wants to get work done. One thing business users need more than most is a good webcam and, in its history, the X1 Carbon’s 720p camera has been decidedly meh.

The new, optional camera ups the resolution to 1080p, but simply pushing a full HD image doesn’t guarantee quality. Fortunately, the webcam promises good low-light performance thanks to its f2.0 sensor and an 87-degree field of view. By comparison, the popular Logitech C920 webcam has a 78-degree field of view, so Lenovo’s camera can show more of your background.

As with most other ThinkPads, the 2022 X1 series laptops will be available with an optional IR sensor. Windows Hello’s facial recognition feature requires IR to verify your identity, but Lenovo is going a step further and offering computer vision capability.

Lenovo has featured human presence detection on previous laptops, which locks your computer when the camera sees you walk away. However, with the 2022 X1 laptops’ computer vision, it will be able to detect a particular person and unlock the computer only when they sit down in front of it.

The software will also use eye tracking to determine when you’re looking away from the screen and dim the display to save power. According to Lenovo, it can also tell if you’re slouching and, like your mom, will advise you to straighten your posture. When we saw the X1 Carbon, X1 Yoga and X1 Nano in person for a brief hands-on, the computer vision software was not yet working, so we couldn’t view it in action.

The overall design and dimensions of the ThinkPad X1 Carbon haven’t changed for 2022. The laptop is a mere 0.60 inches thick and weighs just under 2.5 pounds. It has room for two Thunderbolt 4 ports, two USB Type-A ports, full-size HDMI and a 3.5mm headphone jack.

It wouldn’t be a ThinkPad without a snappy keyboard and, in our brief hands-on time, the X1 Carbon 10th Gen delivered an excellent typing experience. The keys, which have a generous 1.5mm of travel, had a fantastic tactile feel. Like other ThinkPads, the X1 Carbon has both a TrackPoint and a touchpad.

The ThinkPad X1 Nano and X1 Yoga also have the same designs as in 2021. The Nano  tips the scales at just 2.13 pounds while measuring a mere 0.57 or 0.58 inches thick. Its 13-inch display is available in only 2160 x 1350 resolution, in either touch or non-touch varieties. Because of its smaller footprint, the Nano doesn’t have USB Type-A or HDMI ports.

Thanks to its convertible design, the ThinkPad X1 Yoga is a bit chunkier than its siblings, weighing in at 3 pounds with a 0.61-inch thickness. Its 14-inch display is available in 1920 x 1200 and 3840 x 1400 resolutions, with the high-res display sporting an OLED panel. It has the same ports as the X1 Carbon.

The ThinkPad X1 Carbon (10th Gen), ThinkPad X1 Nano (2nd Gen) and ThinkPad X1 Yoga (7th Gen) are due out this spring. We look forward to testing them thoroughly when they become available.