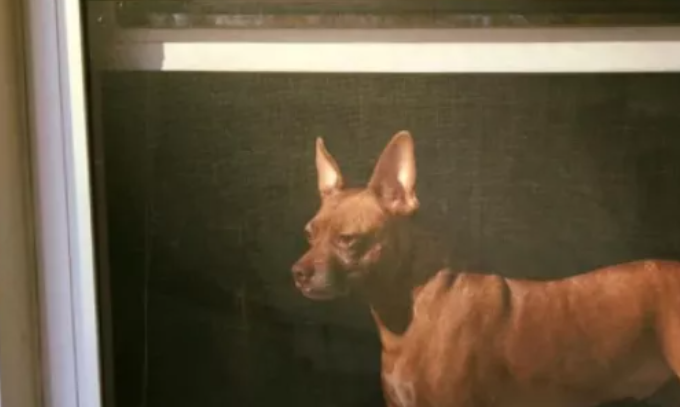 “A picture is worth a thousand words,” as the old adage goes, but sometimes it doesn’t actually display the truth.

That phenomenon is known as an optical illusion, which tricks the eye into seeing something different to what has actually been captured.

And a recent photo of a small dog standing in a window is one such example.

The image, shared to Reddit by user PhatWalda on October 15, depicts a pet, framed in a window sill.

Due to the lighting and material screen it appears as thought the animal is actually the subject of a detailed oil painting.

The social media user has captioned the image, which has gone viral with more than 93,300 upvotes, writing: “I snapped a photo of my dog through a window screen that looks like an old painting.”

Many people have rushed to the comments section to share their opinions on the head-scratching snap, which can be viewed here.

One person, Carmex2121, wrote: “Hard to believe it is not a painting. The window screen really makes it look like a canvas and the lighting is just perfect.”

Another Redditor, Jwp75, added: “Yeah I kind of love the effect created by the screen. Almost a matte finish that takes away depth quite a bit. I am betting there’s another window to the left that the light is shining through, and the picture is taken through the right window.

Tamiaredguard revealed: “I actually thought it WAS an old painting for a few seconds when I first glanced at it in my feed.”

Ordinary gushed: “This is a genuinely special photograph, OP. I would actually buy a print from you if you DM me.”

Replying to the nearly 630 comments, PhatWalda explained that the pet in question was “The One that Got Away. “

The Redditor went on to reveal: “This sweet dog died young from cancer… and this photo perfectly encapsulates his soul. I’m so glad y’all like it.”

“I am floored today, and frankly, deeply touched that so many people enjoy this photo and my sweet dog.”

PhatWalda then went on to give some context to how the photo turned out to look like an oil painting, writing: “To answer some questions: I took this from the outside, and the dog is standing inside, on the back of a couch that’s butted up against the window.

“The trees you see in the top pane of glass are a reflection. The dog was part Chihuahua, part Min Pin, part Boston terrier, and part hell on wheels. And yes — I have framed this already — but I haven’t made it into a painting yet.”

Speaking to Newsweek, the dog owner added: “It’s funny how a simple iPhone camera, some autumn light and a screened window can capture the beauty of animals and life.

“My beloved dog is now immortalized, thanks to kind strangers on the internet. Sometimes humans are pretty great.”