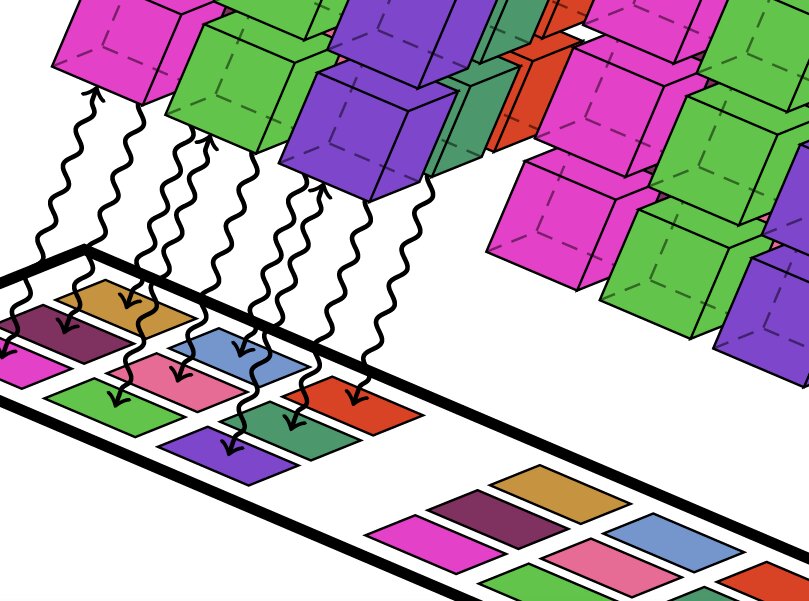 Quantum computing systems, computer systems that are based on the key principles of quantum theory, could significantly outperform conventional computing systems, both in terms of speed and performance. Over the past decade or so, many physicists worldwide have thus been trying to develop these systems and assess their potential.

Instead of encoding information in bits, units of information with binary values (i.e., either 1 or 0), quantum computers use quantum bits or qubits. Qubits are quantum mechanical analogs of bits that can exist in more than one state (i.e., 1 and 0 simultaneously).

Most quantum computing systems developed so far consist in a series of qubits placed on a 2D chip, which directly compute information. Classical computers, on the other hand, are made up of a processor, which processes information, and a memory, which stores information.

Researchers at Université Paris–Saclay, CNRS, CEA, have recently carried out a study evaluating the performance of a quantum computer with a structure that resembles that of conventional computers. Their results, published in Physical Review Letters, suggest that incorporating quantum information storage units into quantum computing systems could enable the creation of devices that contain significantly fewer qubits in their processors.

“The architecture usually considered for quantum computers consists in laying all the qubits on a 2D chip and running the computation directly on those qubits,” Élie Gouzien, one of the researchers who carried out the study, told Phys.org. “In our work, we wanted to challenge this idea of having all the qubits on a single processor and investigated another architecture, closer to the one of a classical computer, where a small processor is coupled with a memory.”

To effectively compare their architecture with existing quantum computing systems, Gouzien and his colleagues decided to evaluate their ability to run a given algorithm. More specifically, they evaluated the resources that their architecture needed to run this algorithm, including the error correction overhead.

“We detailed the decomposition of the algorithm into elementary gates, adapting it to fit the architecture under investigation,” Gouzien said. “We also took into account the overhead of the error correction. We then put those two parts together to evaluate the physical resources required to run the factorisation algorithm.”

The researchers showed that using a processor made of 13,436 physical qubits combined with a memory that can store 28 million spatial modes and 45 temporal modes, a 2048-bit RSA integer could be factored over 177 days with 3D gauge color codes. They also suggest inserting additional error-correction steps of the stored qubits every second, which would only increase the run time by approximately 23%. The team found that they could also achieve shorter run times and storage times simply by increasing the number of qubits in the processing unit.

Overall, Gouzien and his colleagues found that the addition of a memory component could dramatically reduce the number of qubits inside a quantum computing system’s processor. In their paper, the team suggests that their architecture could be realized by placing a microwave interface between a processor made of superconducting qubits and a multiplexed memory.

“Of course, designing an efficient quantum memory is not an easy task, but it is already a research domain, and it is a more distinct challenge than fitting millions of qubits into a cryostat,” Gouzien said. “We hope that our article will stimulate research on quantum memories, and also orientate it toward their use for computation.”

Citation:
Study demonstrates the potential of a quantum computer comprised of a small processor and a storage unit (2021, October 13)
retrieved 13 October 2021
from https://phys.org/news/2021-10-potential-quantum-comprised-small-processor.html

This document is subject to copyright. Apart from any fair dealing for the purpose of private study or research, no
part may be reproduced without the written permission. The content is provided for information purposes only.