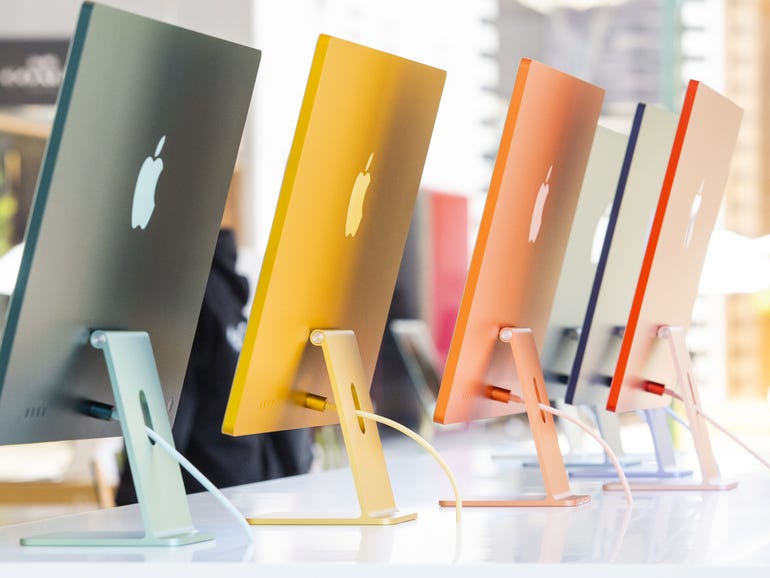 All-in-one (AIO) computers that integrate the internal components into the same chassis as the display have a long history, stretching back to 1980s devices such as the Osborne 1 and Kaypro II. However, most people now associate the AIO category with a computer that looks very much like an LCD monitor, and in particular with Apple’s range of LCD-based iMacs, which debuted with the iMac G4 in 2002.

AIOs have their pros and cons. On the plus side is economy of space, fewer cables, transportability and an often stylish element to the design. On the minus side is less power, upgradability and repairability than a traditional desktop PC at the same price point.

An AIO is likely to fit the bill for many remote workers who require a space-efficient computer with a decent-sized screen and no longer need to transport a laptop between office and home.

Here’s a selection of the best AIO computers in various categories, covering different price points, use cases and operating systems. 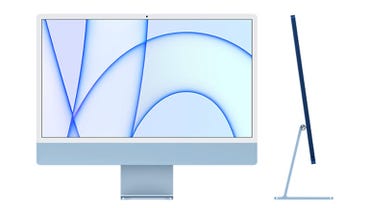 Apple’s M1-based 24-inch iMac, released in May 2021, is the company’s first AIO to run on Apple Silicon. It’s also the only current iMac, Apple having discontinued its Intel-based iMac Pro in March 2021 and the 27-inch iMac in March 2022.

Built around a 24-inch 4.5K Retina display, the current iMac is impressively slim thanks to the highly integrated design of the M1 SoC (system-on-chip), with the screen panel measuring just 11.5mm thick. The entry-level configuration comes in four colours (blue, green, pink and silver), while the more expensive models (with an 8-core GPU) add yellow, orange and purple to the palette.

There are three off-the-page configurations, starting at $1,299 for a model with an 8-core CPU and 7-core GPU, 16GB of RAM, 256GB of storage, two Thunderbolt 3/USB 4 ports and a Magic Keyboard. Stepping up to $1,499 buys you an 8-core GPU, two more on-board (USB-C) ports and a Gigabit Ethernet port built into the power supply, plus Touch ID on the Magic Keyboard. The $1,699 model has 512GB of storage. A fully maxed-out configuration (16GB RAM, 2TB storage, Magic Mouse+Magic Trackpad, Magic Keyboard with Touch ID and numeric keypad) costs $2,658.

The striking design of the 24-inch M1 iMac makes it suitable for both homes and offices, and the performance and power efficiency of the M1 SoC is impressive. However, it carries a premium price tag, and you’ll need to ensure that the specification you order will cover the system’s expected lifetime, because user upgrades are not an option. 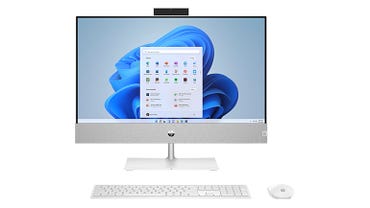 The ‘Snowflake White’ Pavilion 24 All-in-One looks smarter than its budget price tag suggests, with the 23.8-inch IPS panel sitting above a speaker grille on a durable aluminium stand that can tilt from –5 to +25 degrees. There’s no height or swivel adjustment though. The 5MP webcam at the top of the display can be popped up or hidden away as required, but there’s no infrared support and therefore no scope for Windows Hello face authentication.

You can’t expect too much in the way of performance from the HP Pavilion 24 All-in-One, especially in the most affordable configurations with entry-level (Intel or AMD) CPUs, integrated graphics and 8GB of RAM, but you will get more than enough to handle mainstream productivity and entertainment workloads.

HP’s Pavilion range of AIOs is also available with 22-inch and 27-inch screens. 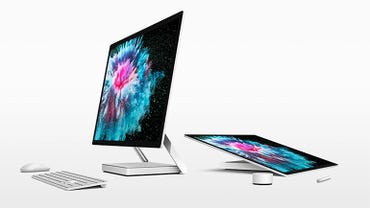 Launched back in October 2018, Microsoft’s Surface Studio 2 was well received, but is now distinctly long in the tooth, at least in terms of specification – it’s based on 7th-generation (14nm) Intel Core processors, five behind the current 12th-generation (10nm) chips. However, the Surface Studio’s innovative creator-focused ‘drawing board’ design is holding up well (and clearly influenced the recent Surface Laptop Studio), so there are high hopes for a Surface Studio 3 sometime in 2022.

With the computer components built into the base and the display able to move between conventional and drawing-board modes thanks to its ‘zero-gravity’ hinge, the Surface Studio 2 is a striking bit of kit. The 28-inch 4K+ multi-touch display supports the sRGB and DCI-P3 colour spaces, and is compatible with Microsoft’s Surface Pen and Surface Dial accessories.

At the back of the base there are four USB-A ports and one USB-C port, a Gigabit Ethernet (RJ-45) port, a 3.5mm headphone jack and an SD card reader. The USB ports are all 5Gbps (USB 3.2 Gen 1×1) connections. Wireless connectivity is behind the times, too – no Bluetooth 5.x or Wi-Fi 6 here.

Clearly the Surface Studio 2 is due an update; this was rumoured for the September 2021 Surface event, but didn’t materialise, possibly due to chip shortage issues. It remains an excellent design, but the 2018-vintage model is increasingly hard to get hold of, and our recommendation here comes with the caveat that it may soon be superseded by a Surface Studio 3 model. 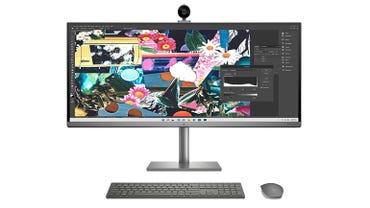 Creators and power users often need the largest screen possible, and that’s what HP has delivered in the shape of the Envy 34 All-in-One, which was announced in September 2021.

The display is a 34-inch IPS panel with 5K (WUHD) resolution, 500 nits brightness, an anti-reflection coating, a low blue light mode and a claimed screen-to-body ratio of 98.6%. It supports 98% of the DCI-P3 colour gamut and is colour calibrated out of the box. The screen is height- and tilt-adjustable, but there’s no swivel support.

Nice touches include the detachable magnetic 16MP webcam that can be placed anywhere on the top, bottom or sides of the display and Qi wireless charging built into the stand base. Even more welcome is access to the RAM and SSD slots via a panel at the rear – an unusual feature on an AIO. There’s also a good array of connections, including two 40Gbps Thunderbolt 4/USB 4 ports. 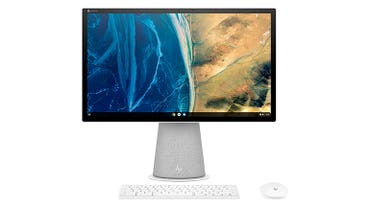 Most Chrome OS devices are laptops or 2-in-1s, but HP offers an intriguing alternative in the Chromebase All-in-One 22, whose standout feature is a 21.5-inch touch screen that can pivot from standard landscape mode into upright portrait orientation.

This AIO has a distinctive design, with the screen attached to a cone-shaped fabric-clad base that houses a pair of 5W B&O-tuned speakers and a collection of ports at the back — a pair each of USB-A (10Gbps) and USB-C (5Gbps), plus a 3.5mm combo audio in/out jack. The power button is also here, and there’s a volume rocker on the right side. Another neat design feature is the two-stage privacy cover for the 5MP webcam: half-way closed turns off the video, fully closed turns off the mic as well.

Read more: On the go and at home, HP branches out in Chrome OS line expansion

The 21.5-inch IPS touch screen is limited to FHD (1920 x 1080) resolution and 250 nits of brightness, and supports only 72% of the NTSC colour gamut. It supports 20 degrees of tilt, plus the aforementioned pivot function, but there’s no height adjustment. 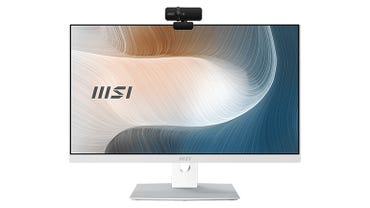 MSI’s Modern AM24P 11M may not be particularly elegant, but it has a number of features that make it attractive to business users, either in the office or working from home.

The 23.8-inch IPS screen is adjustable for both height (0-130mm) and tilt (-4°~20°), and can also be mounted on a VESA arm in order to maximise desk space. The screen also benefits from eye-care technology designed to minimise flicker, blue light and glare, although the 92.6ppi FHD resolution could be higher.

Elsewhere, there are HDMI in and out ports, the former turning the screen on automatically when an external device is connected. Another unusual feature for an AIO is support for storage expansion via a removable 2.5-inch SATA hard drive or SSD. The drive bay is on the right side, just above a small joystick that controls the OSD menu. Also notable is the 1080p webcam, which is an external USB-connected unit that perches on top of the screen, rather than being integrated into the bezel.

The entry-level price looks tempting at $549.99, but that’s for a distinctly low-end configuration based on a Pentium Gold 7505 processor with 4GB of RAM and 128GB of SSD storage. You’ll need to pay significantly more for a model that can tackle a decent range of business workloads.

What is the best all-in-one computer?

The Apple iMac 24-inch (M1, 2021) is ZDNet’s top choice. But one size doesn’t fit all. See our comparison chart below to quickly see how the iMac differs from all the other top AIO PCs on our list.

Which is better: An all-in-one computer or a traditional desktop PC?

It all depends on your priorities. If you value economy of space, as few cables as possible, a degree of transportability and stylish design, you’ll usually be better served by an AIO. On the other hand, if it’s compute power, upgradability and repairability you’re after, then a traditional desktop PC will generally offer more for your money at the same price point.

Which all-in-one computer is right for you?

As ever, ‘it depends’. Overall, we think Apple’s 24-inch M1-based iMac is the pick of the AIOs on the market for its combination of design and all-round performance, although some potential buyers will be put off by MacOS, and others by the premium price. Windows fans have plenty of choice though, ranging from 24-inch models from HP (Pavilion) and  MSI (Modern) at the affordable end of the scale, up to the premium large-screen HP Envy 34 All-in-One and Microsoft Surface Studio 2. Chrome OS users get a look-in too, with a very credible offering in the shape of HP’s Chromebase All-in-One 22.

How did we choose these all-in-one computers?

I have been writing, commissioning and editing reviews of PCs (and many other types of tech product) since the 1990s, and can remember using a Kaypro II in 1984. The selection process for this list is based on a combination of personal usage and experience, involvement in the ZDNet reviews process, and analysis of other reviews and roundups.

Are there alternative computers to consider?

Check out some of our other guides on the best laptops and desktops available right now:

Between all these resources, you should have no problem finding the best PC for you.