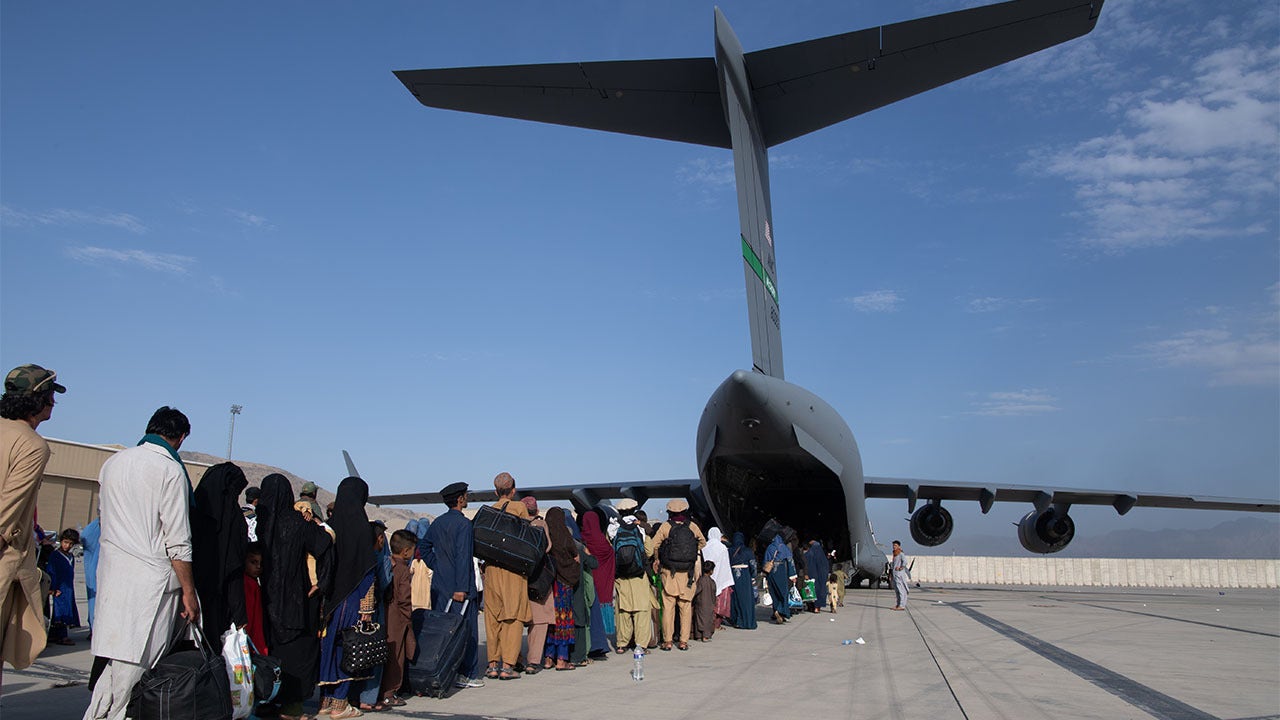 Former Trump Deputy National Security Advisor K.T. McFarland discusses infighting in Afghanistan, the Biden admin working with the Taliban and Americans left behind in the country.

The push to resettle the first wave of Afghan evacuees brought to the U.S. is expected to take months longer than first anticipated as a measles scare, a nationwide housing shortage and paperwork delays have slowed the process, according to government and resettlement officials familiar with the effort.

According to Defense Department officials and volunteers involved in operations, the goal originally was to resettle the evacuees by the end of the year if not sooner. But earlier this month officials began telling volunteer groups they would likely be needed through March or longer. “There is no way we are done by Christmas,” said one defense official.

More than 50,000 Afghans are housed temporarily on eight military bases around the country awaiting resettlement to permanent homes. Their slower-than-expected release means they will have to remain for months in cramped barracks where supplies are often stretched. Domestic violence cases have also cropped up within some of the Afghan refugee communities. The Department of Homeland Security, which is overseeing the resettlement program, recently sent personnel to address such cases, a DHS spokesman said.

The Biden administration hasn’t publicized a timeline for the resettlement program, dubbed Operation Allies Welcome, but delays in moving the first wave of evacuees off U.S. bases will have a ripple effect: The roughly 10,000 evacuees now living on American military installations overseas face lengthier stays, with those who landed elsewhere set to wait longer still.

“Even though we are pretty good at welcoming refugees into the country, we don’t normally do it at this pace,” a senior administration official said.

About 6,000 Afghans have been resettled in local communities so far, and administration officials and resettlement groups said the pace is picking up. The federal government is giving priority to resettling at-risk populations such as those who are fleeing domestic abusers, a DHS spokeswoman said.

Because of the way the Afghans arrived in the U.S., they aren’t legally classified as refugees—another reason resettlement organizations were reluctant to take on so many cases quickly. Congress allocated $6.3 billion to the resettlement effort in its bill late last month averting a government shutdown, entitling the Afghans to several months of healthcare and cash assistance to help pay for rent, food, and English classes.

Unlike conventional refugees, who apply and are processed through regular government programs, the Afghans also have no guaranteed immigration status unless Congress passes a White House-proposed law issuing them green cards. Otherwise, many would need to file for asylum, an already backlogged system that would take significant legal assistance to navigate.

A series of problems, rather than any single issue, have slowed processing times for Afghan evacuees. A measles outbreak prompted officials at military bases to carry out a broad vaccination campaign, giving refugees a full course of shots for Covid-19, measles and polio—an effort that slowed resettlements for weeks.

Resettlement agencies, which contract with the State Department to help the Afghans, say finding off-base housing is a big challenge. A nationwide housing shortage, coupled with soaring rents, has made it tougher to find landlords to take on potential tenants with no existing income or credit scores.

The agencies are further limited in where they can look for housing. People receiving services must live within a hundred miles of a resettlement office, which are run by independent organizations working closely with the federal government. The Trump administration shrunk the refugee program significantly, leading roughly a third of the existing 340 offices around the country to close. If the evacuees leave with a family member or friend, they sometimes risk losing resettlement benefits offered by the government.

“Some of the places where there are sizable Afghan communities, like in California and northern Virginia, they’re particularly expensive,” said Melanie Nezer, senior vice president of public affairs at HIAS, one of the resettlement agencies. Another challenge resettlement groups face is simply “the sheer numbers of people who arrived at once,” she said. “Normally refugees would come over a slower period of time.”

Bureaucratic barriers are also a factor. The State Department reactivated an old database system, called Hummingbird, that staff on bases must enter the Afghans into to match them with resettlement slots. But the intake had been done using paper forms, and the information later manually entered into the database, according to officials familiar with the process. “There’s a high rate of human error,” one of the officials said.

A State Department spokeswoman said the system is no longer manual.

Once they are matched, the International Organization for Migration, a United Nations agency that coordinates the movement of refugees and migrants, is charged with booking travel from bases to the Afghans’ final destinations. But the organization is understaffed in the U.S., people familiar with the matter said, and in some cases it has booked flights for Afghans but failed to notify resettlement agencies that the people were on their way. The IOM referred requests for comment on its role to the State Department.

Sahar Mohammad, a former translator for the U.S. military in Afghanistan, fled Kabul with his wife and five children three days after the Taliban takeover of the city. They flew to Abu Dhabi, where they stayed for two weeks before coming to Fort Dix, a military base in New Jersey.

Conditions on the base were difficult at first, Mr. Mohammad said. The tent he was living in didn’t have doors or soundproof dividers between families, and his family had trouble sleeping with the noise. The tents have since been upgraded, and his family now has a clean, more private room, he said.

Clothing has also been a challenge. Each member of his family was permitted to bring one small bag on the flight out of Afghanistan, and they each packed two sets of summer clothes. But the weather has turned colder in New Jersey and the military hasn’t yet been able to bring them more seasonally appropriate clothing, he said.

“I don’t want to complain because we are in the U.S., and they are trying their best,” he said. “But it is hard. We can’t start our own lives or send our kids to school. We feel like we are not free.”

Mr. Mohammad said he would like to move to Northern Virginia, where he knows friends and other former employees of an American contractor he worked for after leaving his military job. But he has been warned that if he leaves the base he might not receive the resettlement services that could help him find a home and assist with rent.